The One Scene That Made Cate Blanchett Do Thor: Ragnarok

With the upcoming release of Thor’s third solo film (and his fifth appearance in the Marvel Cinematic Universe), it seems that the definite superhero fatigue that so many critics and filmmakers have predicted isn’t coming anytime soon. That could very well be due to the fact that Marvel continues to hire seasoned and Oscar-nominated actors from Anthony Hopkins to Ben Kingsley to Robert Redford in their films.

The upcoming Thor: Ragnarok is looking to be no different, as fan-favorite Jeff Goldblum and veteran actress Cate Blanchett both look as if they have pretty significant roles — Blanchett especially considering that she’s playing Hela. In a recent interview with E! News, the Curious Case of Benjamin Button actress shared which specific scene really grabbed her attention before she signed on for the film: the scene (prominently displayed in the movie’s trailer) where she snatches Thor’s mighty hammer right out of the air and reduces it to mere rubble.

“That had me at ‘hello,’ actually. I thought that was really exciting that they were prepared to destroy Thor’s power in the first few minutes. So, yeah, it’s a nice entrance.” 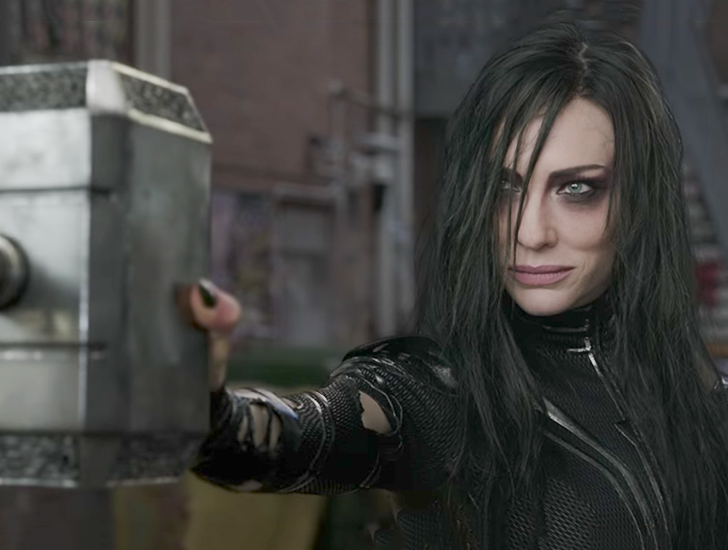 Besides a really kickass scene like that, Blanchett was also very keen on playing what will be Marvel’s first featured female villain. “I only realized that really when I got on set and you think, ‘Wow! It’s taken this long to catch up! But you know, Marvel is catching up at a rapid, rapid rate singling out Marvel’s marvelous women: You’ve got Captain Marvel coming out with Brie [Larson] and I mean, all these incredible women who are in Black Panther… and Scarlett [Johansson], of course.”

The actress is hardly the first person to gush about their villainous portrayal, as Ant-Man’s Corey Stoll, Dr. Strange’s Mads Mikkelsen, and Spider-Man: Homecoming’s Michael Keaton have all expressed their exuberance about bringing to life such rich and complex bad guys.

Click to the NEXT PAGE to watch the most recent trailer!