Do you want to build a snowman? Perhaps one that’s at least 25 feet long.

Frozen fans rejoice! After four years of on-ground participation, silly snowman Olaf will take to the sky in the 2017 Macy’s Thanksgiving Day Parade.

The warm-hearted Frozen character voiced by Josh Gad will star in his very own Pixar short Olaf’s Frozen Adventure, debuting with Pixar’s new film Coco. The film takes the big screen November 22 and the following day Olaf will take to the streets in the 91st annual Macy’s Thanksgiving Day Parade in New York City.

“Having an Olaf balloon alongside Mickey, Elmo and Big Bird is a dream come true and something that, because [the parade’s] so storied and has such a long tradition, I now get to share with my own kids,” says Gad. 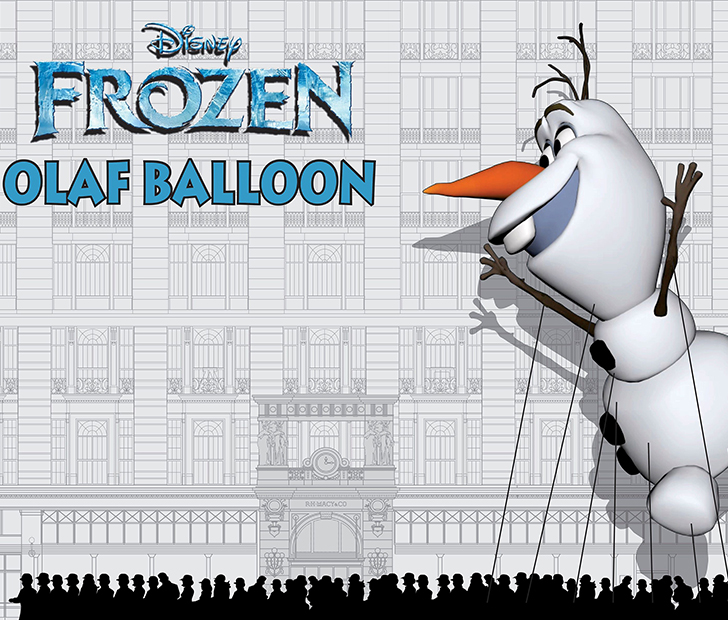 The actor remembers watching the parade with now wife Ida Darvish in 2015. Gad, who was starring in his first Broadway production, The 25th Annual Putnam County Spelling Bee, was living in an apartment near Macy’s.

“We were standing there on this rooftop watching all this in the rain, and it was just such a magical experience,” Gad says.

Chris Buck, director of the 2013 film, sketched the balloon out before passing it over to the Macy’s Parade Studio design team.

Gad is humbled to have his animated role join an elite list of ballooned characters and grateful to see how children have connected with Olaf.

“Whether it’s his purity, innocence or naïvete, there’s something they all can relate to or have some sort of entertaining response to,” Gad says. “I absolutely treasure that.”

The production work for the Frozen sequel has begun and the film is expected to hit theaters in November 2019.

If your little one, or yourself, would like to catch the colossal character float, the parade will be broadcast on NBC at 9 a.m. eastern standard time.